Spirit: A Stallion that Will Never
Be Forgotten

“They say the history of the West was written from the saddle of a horse, but it’s never been told from the heart of one.  Not ‘til now”, says the narrator at the beginning of Spirit: Stallion of the Cimarron, and we already know that the movie is going to be exceptional. As the plot develops, we are assured that our expectations will be met. Produced by DreamWorks studio, Spirit: Stallion of the Cimarron is an animation directed by Lorna Cook and Kelly Asbury. The voices of the main characters were provided by Oscar winner Matt Damon, and Emmy Award winner James Cromwell. The narration is based on songs performed by Bryan Adams, along with the music composed by Hans Zimmer. Although the movie had its premiere in 2002, it still remains one of the most original children’s movies about animals.

Spirit tells the story about a wild male mustang, who, living peacefully with his herd in the Cimarron land, is captured by several soldiers and taken to a U.S. Cavalry fort. While in captivity, Spirit meets cruel Colonel, who attempts to “break” the horse, and an Indian man from Lakota tribe, Little Creek, who is held there as a hostage. After the escape from the fort, Spirit is kidnapped again by Little Creek and taken to the Indian village. There, he meets a female horse, Rain, with whom he falls in love. The story focuses on Spirit’s journey back home, learning about human nature and regaining his freedom.

What distinguishes Spirit from other children’s movies is the fact that the animal characters are not anthropomorphised. All horses involved in the animation communicate with each other by neighing or nickering, and, perhaps apart from unnaturally rich facial expressions, their behaviour strongly resembles real-life horses. The only animal character that “speaks” is Spirit, who narrates the story. In fact, to achieve a convincing representation of the mustang, for several years the creators observed a real Kiger stallion, which was the inspiration for Spirit’s appearance (Izzo). Thanks to this realistic representation of horses, children may perceive animal characters as intelligent creatures. Without a doubt, many viewers will sympathise with Spirit during his turbulent journey.

The story takes place in western North America of the 19th century, the time of the expansion and friction between the cavalrymen and Native Americans. As King observes, the movie presents “juxtapositions” like “U.S. Fort/Indian Village, Railroad/Cimarron Herd Homeland, Civilization/Nature” (5). Such contrasts enable the young audience to easily differentiate the good behaviour of nature-loving Indians from brutal and corrupted soldiers. Some may claim that Spirit’s depiction of Native Americans is falsely ideal since, in reality, Indians were also capable of cruelty when during the wars with colonisers they killed their enemies with the use of primitive weapons. However, I believe that the creators aimed at educating children about respect towards the natural environment and its inhabitants, which is a very valuable lesson especially now, when our planet is in danger.

Considering the technical aspects of Spirit, I am sure that viewers will marvel at the beautiful images present throughout the movie. Partially drawn and partially computer-generated, Spirit delights with its imagery of landscapes and detailed depiction of grass or horses’ hair. Moreover, what significantly influences the positive reception of the movie is the music, whose role was to “make up for lack of dialogue that has been left out in order to convey more realistic emotions” (Cavanaugh 31). As an experienced composer, Zimmer chose each instrument carefully for a specific musical theme in order to reflect the main character’s feelings. Additionally, simple, yet absolutely touching lyrics of Bryan Adams’ songs perfectly captured Spirit’s attitude towards his family or hostile humans.

In conclusion, after so many years, the DreamWorks animation continues to be an ideal feature for both children and adults. Spirit has an educational value as it teaches about the American Frontier and the beauty of the wildlife. The main character’s journey provides an emotional ride, and the story remains in our hearts long after the end credits. I highly recommend Spirit: Stallion of the Cimarron to everyone, and especially to those who identify themselves as the animal lovers. 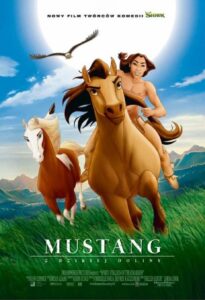